You can tell we have too much time on our hands when we've dubbed the new valance around the deck Holly. Get it? Holly Valance? (Australian TV actress from the early noughties for those not in the know)

So, Holly has come along quite well under Jason and Mr D's capable hands. They finished off the construction phase this morning and now all that is left is some gap filling and a few coats of exterior paint. Jason had primed most of the timber on the public holiday last Wednesday. Next weekend with be set aside for painting. 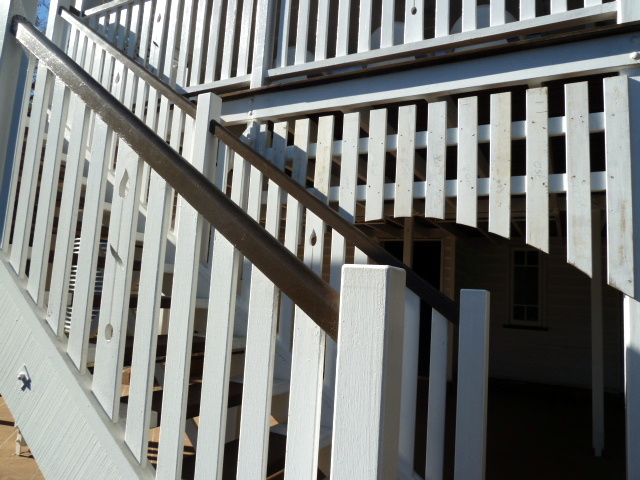 The construction of the arched 'Holly' valance was quite straightforward, but as Jason likes to remind me, "You still need to have your wits about you."

For example, spacing out the palings needed to be planned out beforehand, as leaving a standard space did not always work. Mr D made up a story-rod from a plank of wood, which was effectively used as a template for measuring the distance between each span. The boys had to adjust the measurements accordingly to ensure every batten was evenly spaced.


To achieve the arched curve, Jason drew it freehand, using the centre board as his starting point. He then measured each corresponding board to ensure they were even, adjusting his markings accordingly before cutting the final shape with a jigsaw.

The timber palings are a mix of hardwood decking boards, iron bark and spotted gum timber, which should weather well over time. They also have a nice smooth finish and will be easier to paint unlike the fencing-grade pine that is usually used for such a job. As it is a decorative element, it should ideally look good. Bling!

Anyway, Jason and I are very happy with how it's looking. The deck always appeared too spindly for our liking and the 'Holly' valance gives it more body.
Email ThisBlogThis!Share to TwitterShare to FacebookShare to Pinterest
Labels: DIY, exterior, Queenslanders