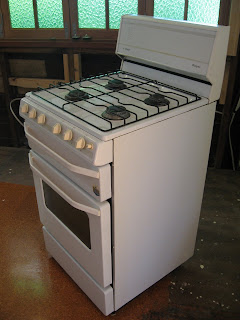 My little old cooker escaped the scrap heap.
Here I was ready to put the poor old thing out onto the footpath. It was in reasonable condition and worked fine, but since we were renovating the kitchen with new appliances, it was no longer needed. I also wanted a super deluxe monster cooker.
A change of heart made me think that perhaps I could sell it on eBay and get a couple dollars. Again, my expectations were very low – I just wanted an easy way to get rid of it while giving it a second life somewhere else.
Who would have thought it was a highly sought-after cooker? Twenty-one bids and a few hundred dollars later, it was sold!
Now, how cool is that?
Email ThisBlogThis!Share to TwitterShare to FacebookShare to Pinterest
Labels: kitchen, renovation