The kitchen - how it was 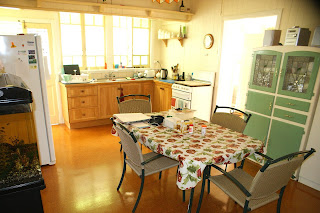 It appears the Sow’s Ear underwent two major renovations -1950s/60s and 1990s. As a result, the kitchen has morphed into this enormous space. From what we can gather, the original bathroom occupied a section of the current kitchen. We believe the bathroom shifted to the back end of the house in the 50s or 60s probably the same time as when the sunroom was built.

There was also an addition of a deck on the back of the house, so again the kitchen was enlarged, we assume, when that work was being done. Sadly there have been too many alterations to do a true “restoration”. But houses are always a work in progress reflecting particular moments in time.

But back to the kitchen. It had two distinct styles – the circa 1990s colonial timber kitchen with speckled green laminate top occupying one side and circa 1950s style built-in painted cabinetry on the other side. Damn! I never got around to taking proper pictures of the kitchen before they ripped it out...

I actually didn’t mind the look of the older style. It gave the kitchen a little bit of history and charm...however it wasn’t really the original kitchen cabinetry and it was entirely useless for storage because the cabinets were too shallow. Alas, they are a casualty of my circa 2009 major kitchen renovation!! 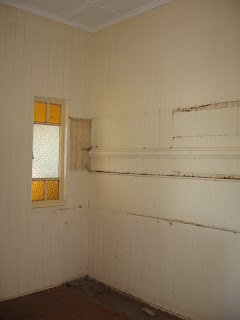 The wall where the old cabinetry lived 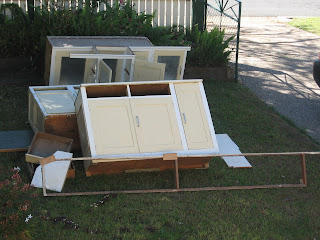 The older kitchen cabinets discarded on the front lawn 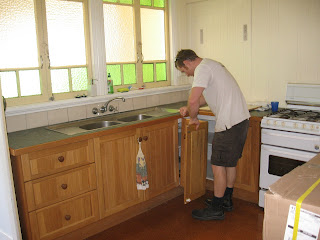 Cabinet-maker removing timber kitchen
I keep thinking of the future generations who will buy this house, tut tutting all the changes Jason and I made to this place...

Before purchasing the Sow’s Ear we resolved to renovate the kitchen immediately. The previous owners had a tall laminate pantry, antique lead light cabinet, an aquarium, an imposing double fridge and a table with four chairs. There was too much happening in the space.

As the kitchen forms the largest part of the internal space, we thought the money spent to do the kitchen would be money well spent, particularly if we stay her for at least five years. Our quality of life would improve greatly to have a fully functioning kitchen.

It will also be the first time I will have a dishwasher and a while since I had a pantry – my friends are aghast that I have lived so “primitively” for so long!

Email ThisBlogThis!Share to TwitterShare to FacebookShare to Pinterest
Labels: before, kitchen, Queenslanders