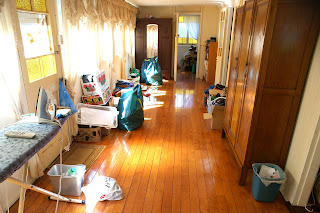 Real estate photo of sunroom pre-sale
Whoever likes moving needs to have their head read. Someone told me that after death, divorce and childbirth, moving house is next on the list of life's stressful events. After my experience, I'd have to concur. Traumatic with a capital T.

We only moved two minutes drive from our old place. The move before that was only three doors up, so we were proud of ourselves we found a place which was not in the same street. After 10 years living in the same street, it was kind of sad to leave. Particularly as the Sow's Ear was not a place I would say I loved...well, not yet.

I actually thought that when we next moved, we would purchase a fabulously funky 50s or 60s modernist house. You know what I mean? Flat roof, large glass timber sliding doors, open plan, perhaps a sunken lounge, terrazzo bathroom floors - a home built around its environment. A Hayes & Scott designed home without the huge price tag. There is one a few minutes away from here - just gorgeous despite the not-in-keeping kitchen and bathrooms...

Anyway, that didn't happen. You'd think after being with the same partner for over 12 years, you would know them...Jason wanted a Queenslander. He dearly wanted a Queenslander that he saw potential in. The last house we previously lived in was my choice and he never truly loved it. He loves this house and is so happy we live here.

Jason's a brass kind of a guy and I am chrome. When he's thinking of furniture for the house, he's thinking English country gentleman and leather chesterfield, while I am thinking Hans Wegner Danish modern. It shall be an interesting journey of compromises.

We were given early access to the Sow's Ear a week before settlement in mid May. Oh dear. What a state it was left in. Let's just say one person's clean is not anothers...and I am certainly not a clean freak.

The first thing we did was to rip out all the lace and frills on the windows. Then all the nails, hooks, latches, barrel bolts that no longer worked or had any purpose went. Sounds like a small task but takes a day in a house this age with three kids running around like escaped lunatics. Our poor neighbours.

Speaking of neighbours, the house next door is vacant, abandoned, deserted. It is a small decrepit Queenslander cottage on a sprawling 812 square metre block. The agent said that a fire went through it years ago and was left vacant. The yard is full of trees, the gates are barricaded shut and it's spooky looking. We've told the boys that Boo lives there. Very 'To kill a Mockingbird'.

Moving day was a 7am start when the removalists arrived. I spent most of the day cleaning the old house and picking up the bits and pieces that were left behind. Thankfully the boys were either at school or being minded by a friend. Jason was at the other end supervising the removalists and setting up our new home. When I finally arrived to the Sow's Ear late that afternoon I was expecting the worse.

Fortunately, Jason had weaved his magic. All the rooms were set up, the beds were made, furniture was put into position - he lovingly put our possessions into our new home and it looked so welcoming. There were still heaps of boxes to unpack but at least the major stuff was done.

Two months or so have passed, we are still surrounded by our packing boxes waiting for some projects to be completed to give us more storage space. Although we have built-in wardrobes in each of the three bedrooms, we have very little in the way of storage. There is one small cupboard in the sunroom near the bathroom for our towels, but it is also used as a broom cupboard for the vacuum cleaner etc.

Our first major project is to renovate the large eat-in kitchen which will give us the much needed storage space for most of our things. It is in the pipeline at the moment, so I will post more about that soon.
Email ThisBlogThis!Share to TwitterShare to FacebookShare to Pinterest
Labels: Life, Queenslanders