All the casement windows are now installed in our bedroom.  They are just waiting on the finishing touches, but at least the fiddly part of hanging the windows is over. 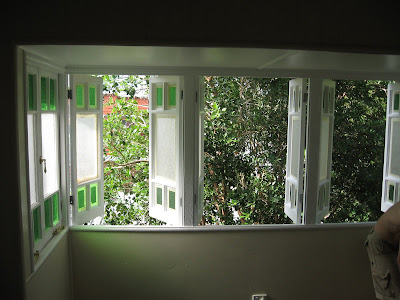 I was hasty in my comments about Jason deriving great satisfaction from manual work. After the weekend, there is definitely no fear of Jason giving up his day job and seeking a builder's apprenticeship.

What an ordeal! The colourful language used when things aren't going exactly to plan would make the most hardened prison warden blush. I would never have believed how difficult it was to hang windows...

After seeing how many times those windows were adjusted to make them open and shut properly, I will never take another timber casement window for granted.

There was one major casualty. A window slipped out of Jason's hands while he was removing it from its hinges, shattering into pieces onto the concrete path below. Fortunately, it was the old window he was replacing, not the new.

Self-preservation prevented me from my usual blog paparazzi thing. The camera would have been trampled on if I had taken a photograph of the incident.

Ah...the romance of tangible results after a hard day's work, figuratively and literally, went out the window.
Email ThisBlogThis!Share to TwitterShare to FacebookShare to Pinterest
Labels: bedrooms, casement windows, DIY