Here is the continuation of our holiday in Tasmania.

After staying in Hobart for a few days we hopped into the hire car and meandered our way up to Launceston via a small historical village called Richmond.

As we weren't able to go to Port Arthur because of the bushfires, we decided to stop at Richmond Gaol for our convict history hit. You can't go to Tassie and not visit at least one defunct penal institution.


We loved Richmond Gaol. It is Australia's oldest and best preserved jail, built in 1825 and has displays and exhibits of what it was like to be a convict. Such a great history lesson for the children to absorb.

While in Richmond we visited another attraction called Old Hobart Town Model Village. It's the city of Hobart circa 1820 replicated in miniature. The research and the work involved to create the models makes it worth a visit, if you appreciate such things of course. The kids liked it and we could pick out a lot of the Hobart landmarks which we had recently seen.

There was also an arts and craft market in Richmond that particular day, so we wandered around to have a look. We rounded the corner of one of the halls and lo and behold I saw a fellow blogger.

It was Jane from Life on Planet Baby who was selling her crafty wares. She got the shock of her life when I introduced myself. I had no idea she was going to be in Richmond that day. Nor did she know I was in Tassie. I very naughtily did not tell my Tassie blogger connection that we were visiting Tasmania...


Don't think you can sneak into a new state without seeing another blogger. Ha! I really didn't want to impose on my blogging mates, especially with the family in tow...but how wonderful to have seen Jane!! That's serendipity.

Anyway, back to the trip.
I was so surprised at how much we loved Launceston. What an easy and pretty place to visit with a meld of old architecture with some great examples of Brutalist architecture...it's also such a great stepping stone to some of Tassie's wine regions. We stayed in an apartment at the Sebel in Launceston which felt like complete luxury. It's located between Launceston Seaport and the centre of town.


On our first full day in Launceston we visited Cataract Gorge and First Basin which is a beautiful natural attraction just 15 minutes walk from the CBD. Unbelievable to have something so beautiful and pristine in a built up area.

We didn't realise the extent of the walk to the gorge when we first set out. We walked the Zig Zag Track to the gorge which is a mostly steep ascent through a one kilometre windy path. Make sure to wear something other than sandals/wedges to do this walk. And bring water and a hat too. Ha! You are rewarded for your efforts though with the magnificent views.


Once you reach the first basin, there is an oasis of a free swimming pool and lovely park lands to greet you. Jason took one of the boys on the chairlift which is one of the biggest in the Southern Hemisphere. I chickened out and took photos instead.


We walked across the suspension bridge and explored the tracks on the other side. It was a bit wobbly.

After our walk the boys were quite exhausted so we took it easy for the rest of the day and made plans for an early dinner at Seaport where the food was great.


On our last day, we decided to do a drive through the Tamar Valley to visit some wineries and visit Beaconsfield before taking our late afternoon flight back to Brisbane.

It is such a gorgeous drive through the Tamar Valley, with orchards and vineyards dotting the landscape. We stopped at Ninth Island or the Kreglinger Wine Estates to taste test their sparkling and pinot range. They were very friendly and helpful and suggested a couple of other wineries we could visit on our way. Needless to say we bought a few wines which are being shipped back to us.

We then drove up to Beaconsfield. We had no expectation about what we would be able to see on our limited time schedule, but were hugely surprised at how interesting the Beaconsfield Mine and Heritage Centre was.

It is sent in amongst the ruins of an old engine house once owned by the Beaconsfield Gold Mine and now donated to the people of Tamar. It is a very hands-on museum and you are encouraged to touch and play with some of the industrial displays, which is fantastic for the children. We spent a lot longer in the Museum than we had anticipated. It is definitely worth a visit to see the ruins and to learn more about the history of the Tamar.

Our last stop on our Tasmanian Trip was to Tamar Ridge Wineries which is owned by Brown Brothers. We stopped in to have a cheese platter and taste some of their offerings. It was a lovely but quick visit as the children had a limited attention span for the finer things of life, despite demolishing the Tasmanian brie. Again we bought some more wine, which includes a great sticky botrytis to have this winter with pudding. Lovely! 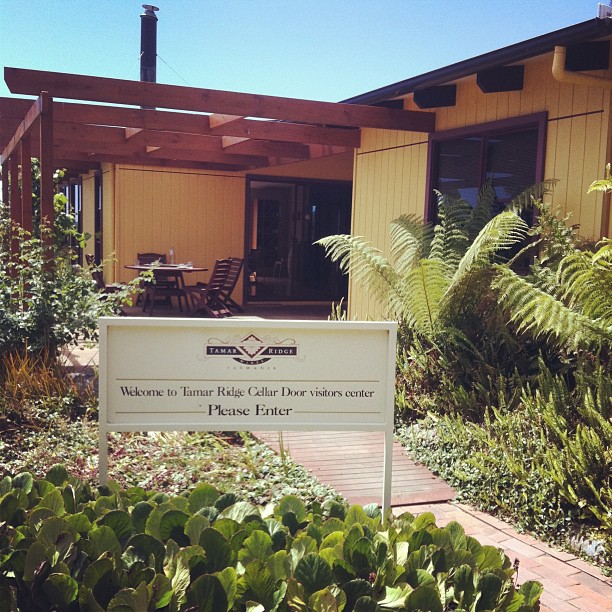 After this winery visit, we were pressed for time and drove down to Launceston airport taking a different route to see a little more of Tasmania for one last time. I asked Jason to drive through a lavender farm with the windows wound down to smell that heady fragrance. Just beautiful.

And so that concludes our Tasmanian trip. It was fabulous, but way too short a visit. We liked it so much that we are thinking of visiting again next year...
Email ThisBlogThis!Share to TwitterShare to FacebookShare to Pinterest
Labels: Life