Last week we said farewell to Jason's grandad who died at the age of 87. It is never easy to say good-bye.

Jason wrote a loving tribute to his grandad that he read out to family and friends at the funeral - it was on behalf of the 17 grandchildren who had special memories of a most excellent grandfather.

The recurring theme among the grandchildren was a memory of Grandad's warm laugh and his love of a joke. He was also remembered as a good decent working man and a exemplary role model for his children, grandchildren and great grandchildren. How lucky we were to have him in our lives.

Grandad will be greatly missed.

Attack of the Mangoes


We've been bombarded by the neighbour's mango tree.

Every couple of hours we hear the cacophony of mangoes pummelling the corrugated tin roof of the shed. The evenings are punctuated by the screeching and scurrying noise of possums in the desperate hunt for that sweet orange flesh.

It's a bumper crop. I've been able to rescue a few mangoes for us, but they're the stringy fibrous variety. They are super juicy and sweet though.

We've been paying the kids to pick up the excess which have fallen on the ground while they're on school holidays. By the look on their faces and their general nattering, you would think that we asked them to pick up dead human bodies...Maybe we need to pay them more?

Anyone got a good mango recipe? What would you do with so many mangoes?

I'm always late to join the club...fortunately this is a club which is worth waiting for: the fiddle leaf fig tree owner's society.


Actually there is no such club. I just made that up... but I did receive a fiddle leaf fig tree as a birthday gift from family on the weekend. How very lucky am I?!


Fiddle leaf fig trees (Ficus Lyrata) are the 'it' plant to have among design and decor circles right now. The plants have been gracing the pages of interiors magazines for many years and in recent times the plants have become more readily available in Australia.

A fellow blogger told me that Big W stocks them in Western Australia. And a few hardware nurseries have been known to stock them too. My plant is from the Cottage Garden Nursery in East Brisbane.

The fiddle leaf fig tree is an evergreen tree which hails from tropical West Africa - its common name is due to its large violin shaped leaves. It is an impressive plant and its glossy leaves are just lovely.


My healthy new plant is a beauty and will reside in the front entry verandah as the room gets a nice amount of sun in the morning. It seems to be doing okay, so far...

I'm just dipping my toes into the water of this whole endeavour...so it is just a very conservative beginning of my empire building. Mahahaha!


The prices are not bad either compared to other online sources - Marché Moderne is about bringing affordable design pieces to people like you and me...

If you want to see what is on offer, check it out here. The shop link will also be on my blog sidebar. More stock will be loaded on to the shop over the next little while...Gosh, I hope someone buys something...
10 comments:
Email ThisBlogThis!Share to TwitterShare to FacebookShare to Pinterest
Labels: mid century, objects

It's been a bit quiet around here on the blog because I've had a fun week celebrating my birthday...yay! 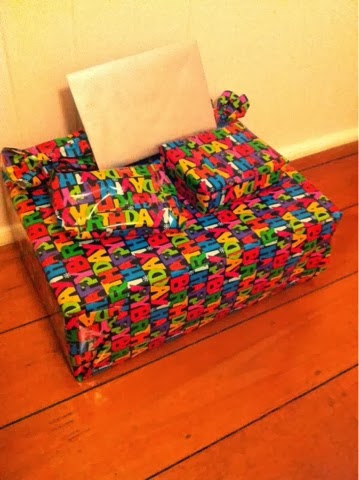 The boys thoroughly spoiled me and I've been in heaven with a new Bose music system which replaces an old CD/radio/tape deck I bought when I was in my early 20s...and is still going strong. Loyalty is one of my strongest points...clearly. 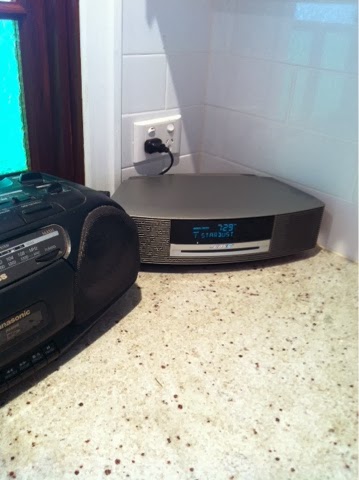 The new system can play CDs and has digital radio. It also came with a Bluetooth device which can pick up the tunes from our iPhones and other devices. We're so far behind the times around here...but we're getting there.

I've put the new system in the kitchen as it is quite compact - we can listen to the radio while entertaining and cooking. It's so good. There has definitely been a lack of music in the Sow's Year and 2014 is the year to change that sad fact.

I was also the happy recipient of a toy monkey. He's been swinging all over the house.You have to agree: he's pretty damn cute. 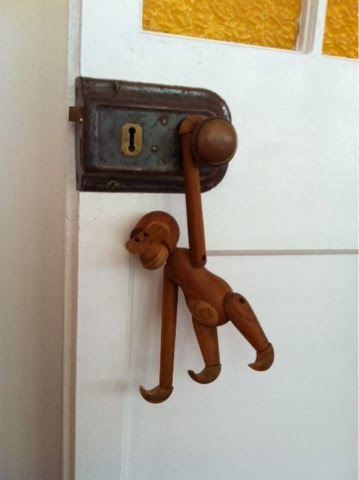 A bottle of Mumm champagne from the kids (actually it was Son #3 who insisted that I get alcohol...and my own wine glass - he's an intuitive soul) was another lovely gift and will  be enjoyed on the weekend with some friends.

Here's to another year of getting older and fun birthdays!

One of my friends is house-sitting for her brother who owns the most delicious piece of Brisbane modernist architecture hidden in the suburbs. She invited us over for morning tea one day while she was looking after this special home. The home is truly a gem gleaming brightly in its leafy surrounds.


Built circa 1960s, the home was designed by well known Brisbane architect Robin Spencer as his family home and it sits sympathetically on the border of a forest conservation park. Floor to ceiling glass walls in the simple yet expansive structure is the most striking feature of the home - the glass curtain walls invite the outdoors in and makes the most of the quiet (except for the warring scrub turkeys) bushland setting.

The amount of floor space is enviable - claustrophobia would never be a problem in this spacious home. A few of us were in awe of the amount of space, mentally calculating how we would furnish the home with our own full-to-the-brim furniture collections. The owner collects contemporary Australian art which is peppered throughout the well-curated house

I loved the use of natural elements in this home  - timber on the ceilings, walls and floors, rock fire place and glass to enable views of the bush from every room. The home exudes a real sense of warmth which can be sometimes lacking in homes of this size. It really is a beautiful family home.


I also loved how the home has remained relatively untouched and that there is great respect for the original design. The owners have done substantial work to the exterior entertaining area  - new decks, paving, fire pit and swimming pool - all of which blends nicely with the era of the home.

My photographs have really not done any justice to this wonderful home...but hopefully it gives you a taste of how amazing mid-century homes can be in the right hands.
14 comments:
Email ThisBlogThis!Share to TwitterShare to FacebookShare to Pinterest

I received a small concrete planter from my Mum. It's very cute and I placed it at the foot of our entry stairs.

The plan was to paint it but after I posted a picture of it on Instagram there was a public outcry to leave it alone. Who knew an old pot could draw out such emotion? Fortunately I like it the way it is too - patina over paint for me in this instance (although it would look great painted!). And leaving it, as is, obviously appealed to my lazy side!

With some left over money on a gift voucher from a hardware store, we went out to buy a plant for it. I chose a geranium variety called Big Red - apparently they are quite hardy and thrive on neglect. Win, win!


On a completely different tangent, Jason has been nurturing some facial hair growth during his Christmas break.

He manicured it into a pencil thin moustache - think a dapper David Niven or swashbuckling Errol Flynn...rather than seedy looking petty crim or Gold Coast pimp...

Anyway, I dared Jason to wear it to work today...not actually expecting him to go through with it. Well, he did and there were a few raised eyebrows and embarrassing silences...he's only just changed jobs recently too. Ha, ha!

Somehow, the David Niven vision was not how his work colleagues described his sartorial tastes. Very funny though. He'll be shaving off his David Niven and will revert back to being good ol' Jason.

And so another year rolls on by...I hope everyone had a terrific New Years' and the coming year brings you much good health and happiness.

We've had a  busy few day over the Christmas/New Year break to do some much needed maintenance on the deck and stairs. I can't remember how long it's been since we re-oiled the decking boards but things were looking pretty shabby on the deck. You really do need to oil decks at least once a year - we had let it go for much longer between coats.

We gave the deck and stairs a good old wash and scrub with a deck cleaner, which basically removes all the built-up grime. It's when we clear the deck and wash it, we can attend to any loose or split boards - you tend to notice any problems as you scrub each board. Anyway, it was all in reasonable condition with nothing really needing immediate attention.

After the boards had dried, Jason proceeded to re-coat the deck and stairs. He wanted to try a different product to the traditional oil he previously used. This time he experimented with a water-based finish. Fortunately, we didn't need to sand off the old finish as it had already worn off - a wash was all it needed.


Jason uses a paint brush to coat the deck. He could used a lamb's wool applicator but prefers a brush - I don't like to question him too much about his choices...at least he gets the job done! He applied two coats of finish and in the areas which are exposed to full sun he gave it three coats. The oil is applied sparingly too - to avoid the boards getting tacky.

The water-based finish worked out well. The clean-up and the wait between each coat was much faster and it has less odour  - always a bonus. The finish is slightly tacky at first but after it has cured for a few days it improves significantly.


The visible difference between coated and un-coated deck was huge. It is well worth the effort when you see the results. We've been living out on the deck since it's been done and enjoying the long summer days.