One of the most pleasant outcomes of participating in Brisbane Open House was how it led to a wonderful meeting with the architects who designed our home. Apparently, the newspaper publicity about the A.F Dawson Residence earlier this month was enough to pique the interest of 82-year-old architect Peter Heathwood to pay me a visit.

And what an enormous privilege it was to meet Peter Heathwood, who also brought along the charming Michael Cardillo, a second year cadet during the time the house was built. Michael's handwriting was even on the original plans. He eventually became a partner in Heathwood's architectural firm which exists today as Heathwood, Cardillo,Wilson, although both Peter and Michael are now retired.

You know it will be a nice visit when your guests bring cake, which they did. They were simply delightful and we had a good old chat! 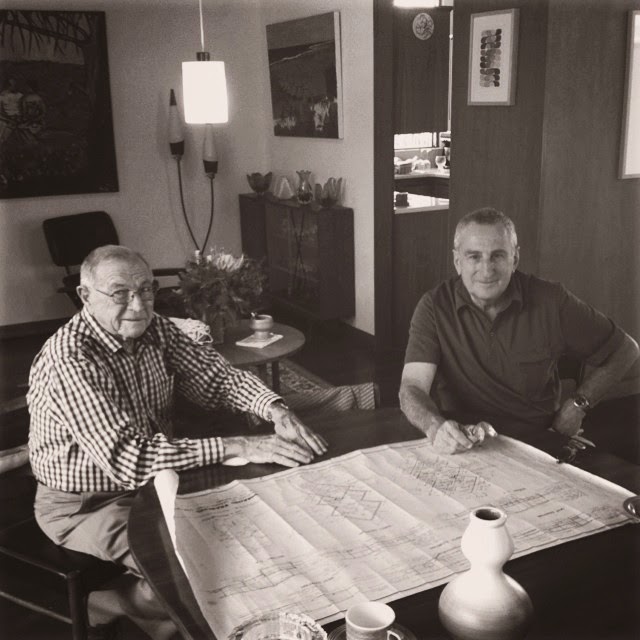 It was quite a special moment to have the people who conceived the design of the house come back after 51 years. They were very comfortable with the home and could talk with great ease about the design features and materials used in the home...like it was built yesterday. They were impressed at how well the home had fared for its 50 plus years.

I had a number of questions about whether or not certain things were original to the house. It was namely the use of lattice for the verandah/patio screen and balustrade, as it seemed at odds with the modernist style of the home. 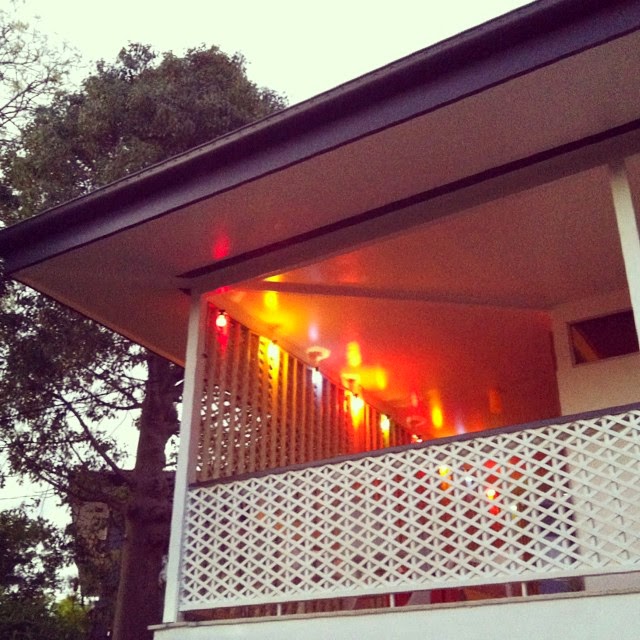 I can confirm the lattice is indeed original. It was used as a buffer on the western side of the house to provide protection from the sun. The lattice pattern was also repeated for the balustrade. It is also consistent with many of Peter's other homes which used forms of screening. Michael visited the house just after it was built and remembers it quite well.

Michael said the house is very much how all of Peter's homes were built. The AF Dawson Residence is one of Peter's 'tent designs' which is quite evident when you enter the home with the central pole in the middle of the house.

Comfort and climate were the overriding imperatives in his homes. His philosophy was a home should provide shelter and his homes were designed for the best possible comfort in our sub-tropical climate. And it is a very comfortable home in which to live! 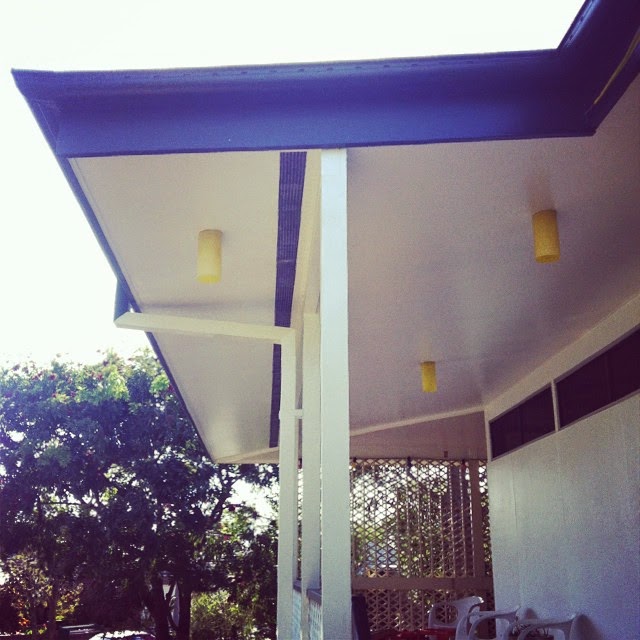 Interestingly, Peter designed all the interior and exterior Perspex light fittings himself because he said you just couldn't get decent light fittings at the time. He was chuffed they were still in the house. The yellow light shades outside were to repel mosquitoes and minimise the bugs which are attracted to white light.

The best line of the day was when Peter entered the refurbished 1980s kitchen and exclaimed, "Well, this is certainly not our work!" You'd understand why if you saw our country style kitchen which is completely out of kilter with the rest of the home.

The kitchen benches would have been much higher and would have had white Laminex bench tops which curved up the splash back and then there was a shelf  for condiments before the overhead cupboards would start. The cabinetry was originally maple plywood with black d-mould handles similar to the cabinets in our bedrooms.

Peter said to give him a call when we renovate the kitchen, as he would be able to help us out. That job has obviously jumped up in the priority list...especially given Peter's age... Stay tuned!
14 comments:
Email ThisBlogThis!Share to TwitterShare to FacebookShare to Pinterest
Labels: Brisbane, Design, History, mid century house, midcentury

The joys of aged maple plywood ceilings end when the reality of repairing them slaps you in the face!

As many of you would know, we recently removed a wood heater from the main living area. You can read about it here if you are new to the blog.

A lot of creative thought went into repairing the hole left in the ceiling after removing the heater flue. The ceilings are made from rotary cut Queensland maple plywood panels. They are the most sumptuous ceilings to behold and was part of the reason we fell in love with this home when we first saw it.

We tossed around various ideas with the help of Danny, a builder who has great experience working on mid-century homes. Initially we thought we could replace the whole ceiling panel; it had sustained water damage from where rainwater must have seeped through over the years.

Sadly, finding rotary cut maple plywood is next to impossible. We tried to source it second-hand and we also looked at the newer plywood products with a view of colour-matching it to 50 year old maple.

Another idea was to steal a panel from one of the bedrooms, and substitute it. You know, do the old 'switcheroonie' trick with a less attractive repair being relegated behind bedroom doors.

In the end our final solution would be the least intrusive and most efficient. We recycled the doors of an old maple plywood cabinet (the original kitchen overhead cupboards to be precise) that had been left behind in the garage by the previous owners (bless them!). Re-purposing the doors and converting them to a ceiling panel seemed the most viable option.

It was a slightly unorthodox solution but it meant we could colour match the ceiling without it being horribly obvious. It also had the added benefit of being free material!

Danny came over and did the job for us...with surgical-like precision...


Danny made a simple template, based on the plywood doors which he had jointed together, as guide. With that template he was able to cut out the damaged ply and make a new space in which to fit the re-purposed plywood doors. 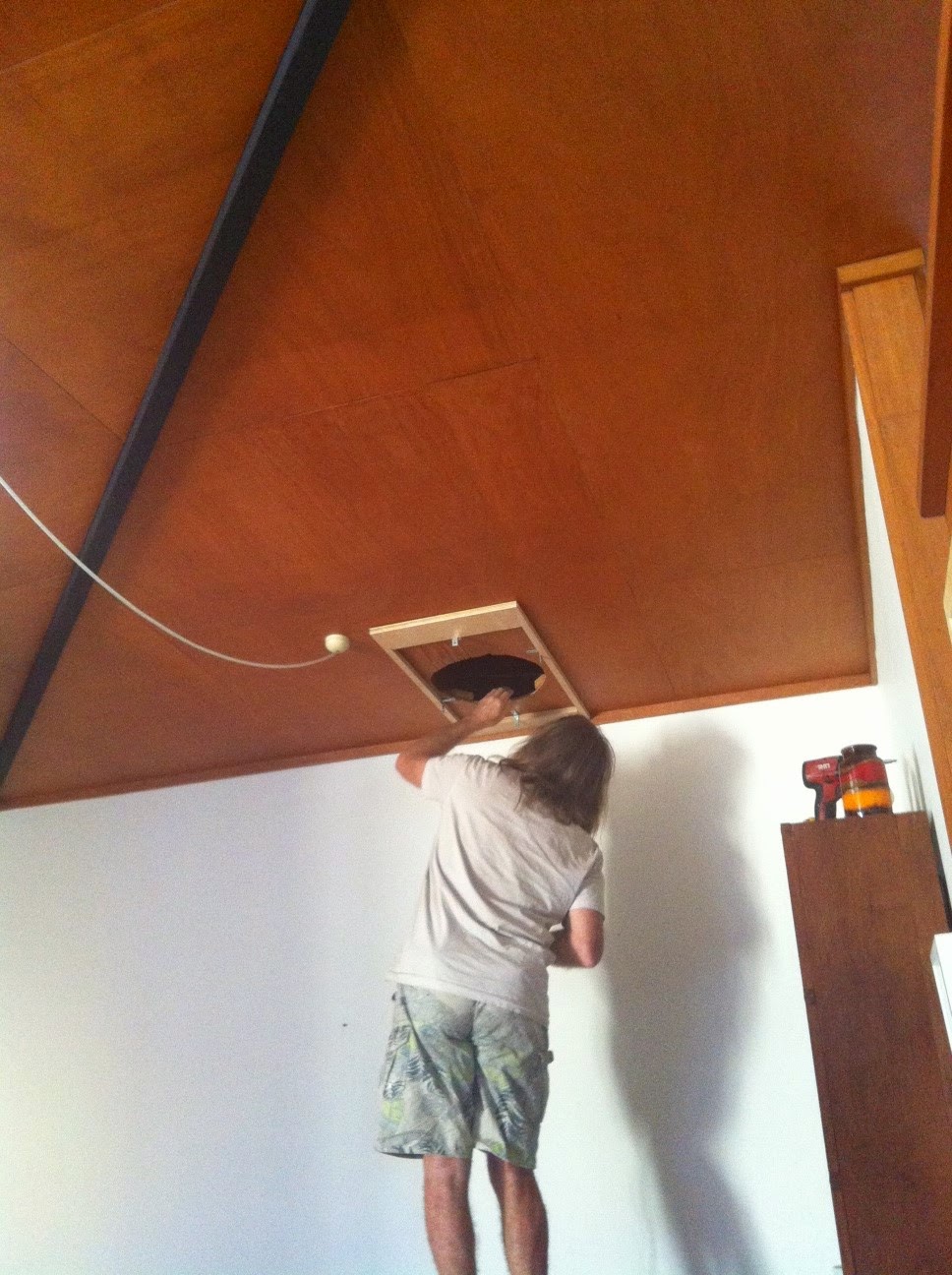 Making the plywood piece fit proved slightly tricky. There was a lot of hand sanding the edges and corners to get a precise fit. Poor old Danny spent a lot of time getting it perfect which is just a beautiful thing to see in action - he took so much care.


Danny planned to nail the piece in place but was afraid the nail heads would detract from the final finish. He changed his mind and decided a quick drying super-grip adhesive would be the best option. He used the Sika SuperGrip 30 minutes and held it in place with a telescopic prop. We left the prop up overnight just to make sure the plywood was not going anywhere!


Et voila! You don't instantly notice the repair, particularly if you weren't aware a wood heater occupied this space. Nonetheless you can still make out there was a repair which I guess forms part of the new history of the home.

We couldn't be happier with the final result...and now we have more flexibility with this space and the ceilings still look great despite the repair.

Well what a busy couple of weeks we've had in the lead up to Brisbane Open House which was held last weekend.

It's all done and dusted and we were so pleased to be involved in the event as part of the residential homes component. For those who don't know, our home was the A.F Dawson Residence in the program.

Jason and I had a terrific time opening our home and sharing it with the general public -  meeting lovely new people and even the neighbours. We were also happy to meet quite a few Fun and VJs readers and instagram followers. Thanks so much for visiting and hearing the story of what we know about the home so far and our plans for it.

For those of you who missed out, you can visit Walk Among the Homes blog to view a special virtual home tour. As the house is very much a work-in-progress, there have been a few changes since then...it's ever evolving as we remove, repair and restore!


We were also chuffed to be in the Courier Mail's QWeekend 4 October issue with an article written by the wonderful Margie Fraser. It is a hoot of a story about how we came to view the house because of the furniture and ended up buying the house instead! 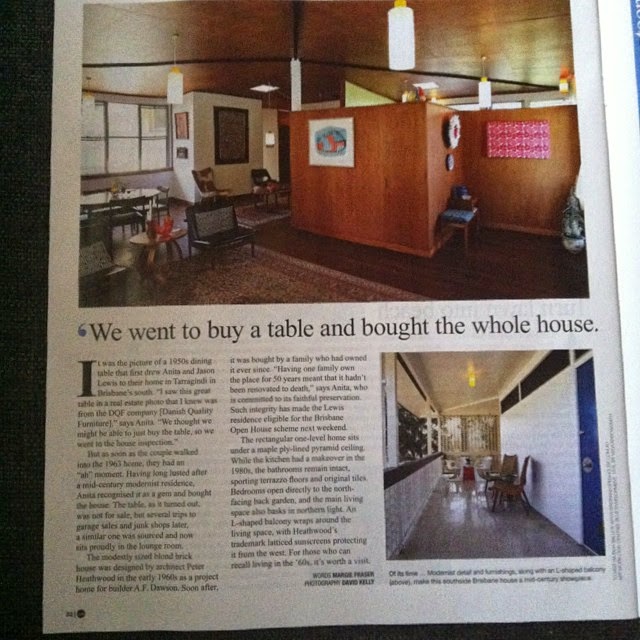 And if you still want to satisfy your curiosity about the house, keep reading here. I promise to keep it updated more religiously as we go along!