I discovered something about our house yesterday afternoon...

We are not entirely sure when the Sow's Ear was built. We've pin-pointed it to perhaps the mid 30s. Some of our friends who are architects and builders all seem to agree the house is pre-WWII, but built sometime in the 1930s.

Although that should be satisfactory enough, I am curious to find more detailed information.

The barrel bolt incident last week has made me mindful of our renovations to the Sow's Ear. Our renovation needs to be respectful to not only the style of architecture but also sympathetic to its humble history. Knowing the history of our home can only make our renovation decisions slightly more informed.

(Brisbane's architectural history had been under valued by local and state authorities of the past - some would argue that it still is under valued. It was very nearly destroyed in the 1980s with the outrageous demolition of important cultural buildings and the removal of about 1000 Queenslander homes per year. Here is an interesting post about the demolition of Cloudland from the blog - Your Brisbane Past and Present.)

Anyway, there is a fabulous document, produced by the Brisbane City Council, for helping residents research the history of their house - Your house has a history: keys to unlocking its past. It includes a real case study of a Queenslander home which I think is a cool chronicle to have as a homeowner - regardless of the age of your home.

I also spoke to a friend who is a Heritage Architect for the Queensland Government who gave me a few extra hints to guide my research.

With this education, I called the Titles Office to arrange an historical title search. Although it didn't give me an exact date, it did give me details regarding the original subdivision of the land and when mortgages were taken out on the property.

Our parcel of land was part of a subdivision in 1888 by Herbert Alfred Watson. The next time it changed hands was in 1927. It was transferred to two spinsters (Zoila Ceferina Mabel Stables and Florence Mary Ethel Stables) and a man (Stanley Day Stables) who were joint tenants in common. The Title also shows that the Stables purchased the block next door (not Boo's block the one on the otherside) in 1931. 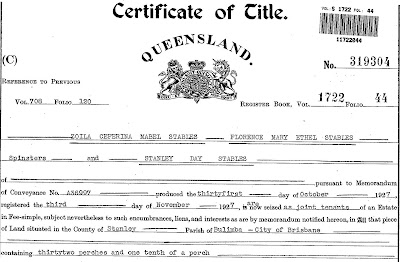 Interesting that women were advertised as spinsters - how times have changed. And what about the bloke?

They presumably built this house on the vacant block (but I don't know that for sure). The property was to remain in the family for over 60 years until Stanley died in 1988. The Certificate of Title tells me that Florence did not remain a spinster and was married in 1933 to Alan Lucy. She died in 1971. No word as to what happened to spinster Zoila.

The property has changed hands three times since Stanley's death - 1990, 2004 and finally 2009, when Jason and I bought the property.

The information we have gives us no details about the house, but at least we know it definitely does not pre-date 1927.

My next port of call is to make an appointment with Brisbane City Council Archives to research their building records to see what else I can uncover about this Sow's Ear. I need to know more.