Six months ago, I made grand plans about how our renovations would progress, with a list of projects to be completed by our one year anniversary in the house.

I've just re-read the list here. Oh dear! We only achieved half of the things on the list and I kept the list deliberately small, so it was achievable. Damn. 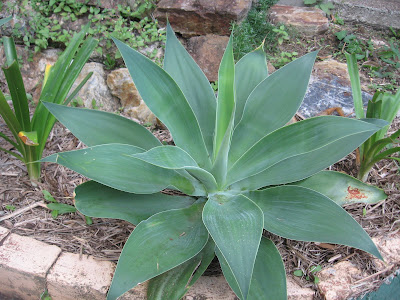 At least the agaves are growing well, with much neglect, in our front yard
We have done nothing to our downstairs room except fill it with more rubbish, we have not renovated Number 1 Son's bedroom and we cheated and just bought shelves to put into the boys' built-in wardrobes. Triple damn.

So much for the blog keeping us accountable! Jason is still experiencing post traumatic stress disorder symptoms after his last renovating efforts. He now has an erratic eye twitch which is most unbecoming...

Ok, we will have to knuckle down and work harder (no more prancing around shirtless, Jason!). Here is the wish list for the next six months:

1. Renovate and paint Number 1 Son's bedroom
2. Fix up the downstairs bedroom so that it is more than just a storage room
3. Complete the painting in the master bedroom
4. Renovate Number 2&3 Son's bedroom.

A shorter list. Surely, I will be ticking rather than crossing in six months time? Wish us luck!
Email ThisBlogThis!Share to TwitterShare to FacebookShare to Pinterest
Labels: renovation