Single bulb pendant lights look great in my humble opinion.
I like the colourful versions produced by N.U.D Collection in Sweden; such a simple, yet groovy way to shed light.
The pendant cord is three metres long, which means you can suspend the light off to one side if your light fixture is located in the centre of the ceiling.
Muuto a Scandinavian group also produce a series of bulb pendants in just single colours. They are called E27 pendant lights. 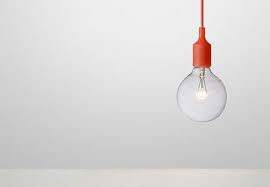 And Australian design firm Lightly do a very funky version of the single bulb pendant. These are woven 14mm  rope lights which lend themselves to macrame like creations. It gets the thumbs up for being Australian made and owned.

Or there is the budget variety from Andrews Light Up which is only one metre long and comes in plain white, black or chrome. They have the advantage of clipping to a standard batten fitting, so you don't need an electrician to fit them.


Having done my research, I think single bulb pendant lighting will feature at the Sow's Ear in the near future. What do you think? (That question is directed mostly to Anonymous Louise who often laments my lighting choices)
Email ThisBlogThis!Share to TwitterShare to FacebookShare to Pinterest
Labels: lighting