What is the collective noun for many caravans?

Well, whatever it is I saw a lot of caravans in the middle of suburbia on Saturday night for the Modernist Architecture and Design weekend. Each year (read about last year's here) the Australian Modern publishers, Chris and Susan, host a fun weekend of modernist architectural talks, films and entertainment. MAD!

This year didn't disappoint and the events were full to capacity. When we arrived we were treated to the sight of about eight vintage caravans parked in and around the mid-century homes in Carina. The theme was cool caravans and cocktails.

Some of the caravans (that travelled from as far as NSW) had actors inside doing a series of readings on topics like drive-in movies, the Mix-master and the typical caravan holiday. It was such a delight to sit in the caravans with lots of different people!

The lovely independent publishers of Vintage Caravan Magazine also provided each guest a copy of their mag. Yay! 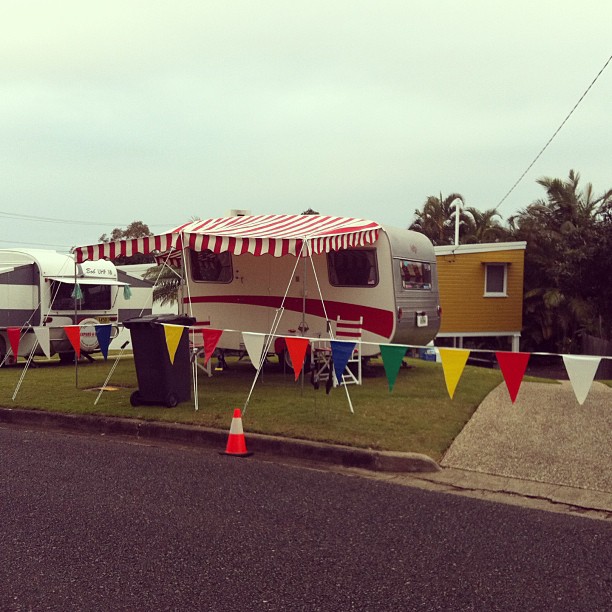 After cocktails and dinner, we all congregated inside to watch architect Bud Brannigan's slide show presentation about a sympathetic renovation he worked on in St Lucia during the 1990s. The small mid-century home had been designed in the 50s/60s by renowned Brisbane architect Dr Karl Langer.

Bud took us on this thoroughly engaging journey of the complete renovation design process. We learnt a little about the original owners who built the home, the sub-tropical designs Karl Langer and landscape architect Arne Fink collaborated on and about the new owners' dilemma of needing more space for a young family.

The renovation was a fabulous success story with the owners being happy with the end result. And we, as the audience, were feeling all warm and fuzzy...until the last slide when Bud revealed the renovated home was sold a few years later and the new owners demolished the building to construct a project home.

Such is life.
The next speaker was Scott MacArthur one of the principal Heritage Architects who worked on the mammoth three year renovation of Brisbane City Hall which was built between 1920 and 1930. What a privilege it was to hear him speak and to view his photographs of the restoration project. Again, it was another engaging talk and although not strictly modernist in nature, it provided an insight into the painstaking job of restoring the heritage listed building.

I haven't seen the refurbished City Hall yet but I am now going to pay a special trip to see it. The new work looked stunning in Scott's photographs.

It is always such fun these MAD weekends. In my next post, I'll show you the photos from the interiors house tour that was held yesterday. And if you are keen to know more about the MAD weekends, drop Chris from Australian Modern an email and he can put you on the subscriber list for next year.
Email ThisBlogThis!Share to TwitterShare to FacebookShare to Pinterest
Labels: mid century