Looks like we're about to get a new Prime Minister next Saturday if all the newspapers and polling results are to be believed. That'll be three different Prime Ministers since I first started this blog and it's only just clocked up four years! Who can keep up with Australian politics' version of musical chairs?

Anyway, if Tony Abbott is going to be the next person in the top job then I need to see how the man lives. What kind of house does the wannabe-PM call home?

After consulting the oracle that is Google Images, I found more shots of his Forestville home than any other politician's home I have featured on Fun and VJs. (You can read about Julia, Kevin and Bob by clicking on their names)

There's exterior photos of Tony's home, some shots in the kitchen, a few in the lounge room and one near the internal stair case. I've simply been spoilt for choice on this occasion!

Well, I have to say that I never picked Tony living in a retro pad! (Jason was quick to crack a joke about the retro house being much like Tony's retro views...ha! Good one!)

It's groovy and I'm so jealous that I could cry in my cornflakes. I love the cantilever style facade, the awning windows and how it is positioned high on the block. It looks to be a late 1960s house, but I could be wrong...

I'm not a fan of the exterior house colour though. It looks beige in these photographs. It would look striking in a strong dark colour and white. It looks kind of bland at the moment.

There's even a pool in the front of the home for Tony to parade in his sluggos. How is that not a surprise to me as well?

I was, however, most disappointed when I saw shots of the kitchen...

Look, it's a nice kitchen but they didn't embrace the mid-century theme as I had hoped. I bet you the original kitchen used to be orange with lots of brown accents. Their kitchen cabinetry is far too country/traditional for the home in my humble opinion. They ought to have gone mod style. Think timber veneer and plain cabinets...slick.

The entire interior seem to be very cream and beige... It's a bit too safe for my liking. It really needs some pops of colour, don't you think?

You'd never know from looking at the interiors, that they had a very cool looking house exterior. An injection of Danish Modern furnishings would suit the home too...I might send them some links to my favourite mid-century mod blogs to steer them in the right direction. 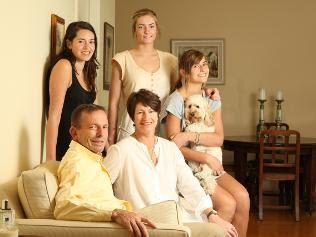 And tonight at 8pm, Kitchen Cabinet is airing on the ABC with Annabel Crabb invited to Tony's home for a barbecue. Hopefully, we'll be able to see more of the would be PM's retro house.
Email ThisBlogThis!Share to TwitterShare to FacebookShare to Pinterest
Labels: Life, mid century