For the past couple of years we've had a light bulb as our light fitting in the study...Sad how that happens.

The bayonet fitting was actually broken and we finally had that attended to on the weekend.

Because the ceiling in this room is quite low we are limited in what we can have as a light fitting.

Rather than buy a new one, we just re-used an old Art Deco glass shade that used to be in the bathroom. It's a bit paint splattered, but it's just going to have to do for now until we are motivated to strip it back. 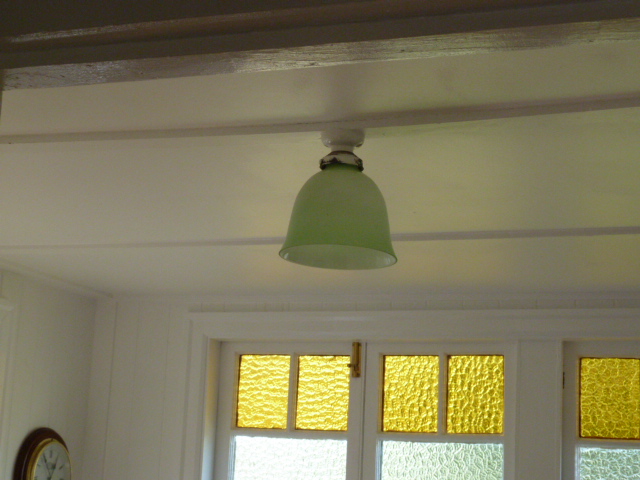 And in more exciting news, I found some new Murano crystals to replace the broken ones in the great chandelier fall of 2011. I've been told by some readers, they remember exactly where they were and what they were doing when they first found out about our chandelier fall...it was big news.


There are about 70 'new' dragon's tears which were part of another chandelier I had picked up.

I'm debating whether to keep the chandelier for the master bedroom though...or just use the tears in our dining room chandelier, as well as replace the drops in our new bathroom light fitting...

Anyway, we are just dripping in Murano crystal tears at the moment.
Email ThisBlogThis!Share to TwitterShare to FacebookShare to Pinterest
Labels: lighting, study