Bedroom progress, awards and a thank-you New fittings for the windows 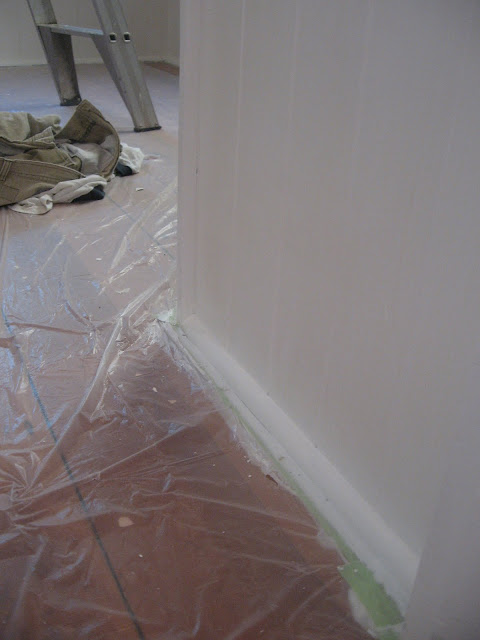 Jason added a quad border onto the built in robe so it matched the rest of the room.
He's very pedantic about the small things.
The bedroom is completely undercoated except for the French Doors which lead onto the back deck. We'll start the top coat in the evenings later this week. It is easier to paint when the children are asleep.

Also I'd like to thank Trish from A dream house for Trish (she's in the process of designing and building a home in the Hunter Valley) and Lou from The little house that could (she's renovating an 1880s Queenslander in the outer suburbs of Brisbane) for giving me a Sunshine Award. Thank you so much for thinking me worthy of this award and for reading my blog.

To accept I need to reveal seven things about myself. I've done this before here and I've also done one for Jason here...

As you probably know by now, I don't like to tag other people. I'm the weak link in the chain. Sorry. Again, if I am a follower, leave comments or have you on my blog roll, then you know I like your blog. It doesn't get any more complex than that.

Finally, I'd like to say thank you to Kylie from Flying Ducks. I won a double pass to see the new French film The Hedgehog (Le Herisson) from her blog giveaway. Kylie writes a great little blog about her life and apartment in Brisbane and has been featured in Apartment Therapy and Design Sponge.

Jason and I saw the film last night at Palace Centro. What a gem of a film! It's a moving story about friendship, love and life set in an elegant apartment building in Paris. We would both highly recommend it if you wanted to see a great film.

I won't make a hash of the plot description. The Sydney Morning Herald has a review here if you're interested. You won't be disappointed.