The very last project for 2011 was to complete all the work which we started on the deck. I'm happy to say that it is now finished and it has come a long way from where it began.
The deck was pre-existing when we purchased the Sow's Ear in 2009. It would've been added by previous owners in the early 90s (it also appears that the deck was extended after it was originally built). Anyway, it is a great space. Our main issue with it was that it was unusable during warm summer days. The tin roof made it too hot to sit out there comfortably.
Our deck is a major part of the house, taking up approximately a quarter of the size of our entire home. Yep. It's huge. The orientation of the deck with the lack of shade trees combined with sun and tin roof equalled HOT AS HADES!
So a retrofit of an insulated ceiling was the solution. Fortunately, we had enough height to do this. We only lost about seven centimetres by adding insulation and a ceiling.
Below are some before shots of the deck.
And here are the after shots: 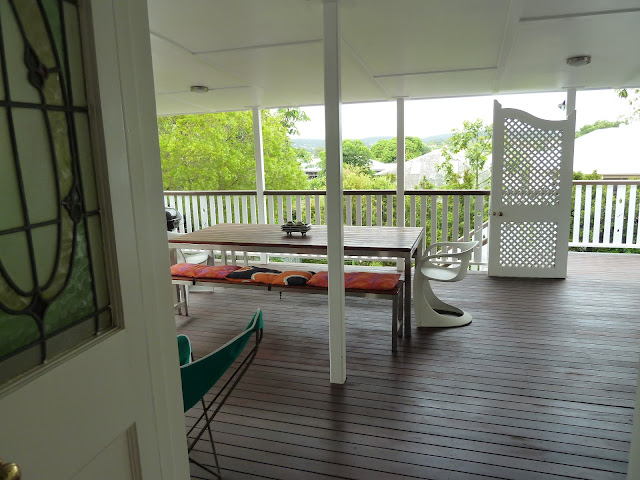 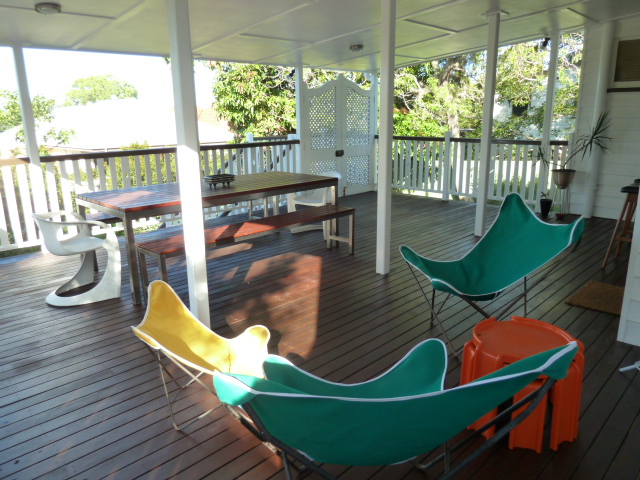 Removed extraneous lattice and laserlite roofing
The lattice closed in the deck substantially on two sides. It may have been put in as privacy screening, but over the years the shrubs and trees around our fence line have matured enough to afford us privacy. It is much more open and our views are now unimpeded. We also replaced sections of old brittle laserlite roofing with tin roofing.

Painted
The 'heritage' colours of cream, dark green and maroon were well past their use-by-date. We used Dulux exterior acrylic gloss - Vivid white (which is the untinted white straight off the shelf - a bright white that is probably not to everyone's taste but works for us) for the weatherboards and deck railings; Peppercorn Rent (it's a chocolate brown with a green undertone) is the contrasting trim on the top handrails, window sills and guttering. The ceiling is also painted a gloss white, which surprisingly evened out the imperfections and warps that naturally occur when retrofitting anything.

Oiled the decking boards
We oil the floor boards at least once a year with Cabots Decking in a Merbau tint. The tinted stain evens out the variation in colour of the two types of decking boards. It is quite a rich colour, which hides the sins of the past. It is hard to pick the difference now and the boards look more seamless.

Insulated the ceiling
Standard ceiling insulation was used on our deck to make it more comfortable on hot days. Fibro cement sheets were used as to make a panelled ceiling. The panelled ceiling on the deck mirrors the ceiling inside the house which we thought was a nice touch ('same mother, same father' as our literary builder, Mr Rooney, would say) - it makes the deck feel more like a natural extension of the house.

Insulating the ceiling was a massive job. You can read about how massive it was here,  here, here and here, if you're super keen...This is real life weekend renovating which happens over a matter of months rather than days!

The difference the insulation and new ceiling has made is amazing. We can now sit out on the deck, have lunch and not fry. Heavenly. Comfort and function can never be underestimated.

Added new light fittings
There were old fluoro lights on the deck but we swapped them out for more discreet bunker lights which provide low ambient lighting which is perfect for entertaining in the evening.

Decorated with new and vintage furniture
We splurged on a new outdoor setting which can seat a crowd of adults and kids. Over the years I've collected and thrifted a number of vintage mid-century pieces such as Casalino chairs, T H Brown bar stools, butterfly chairs, Stoppino nesting tables. A friend of mine also sewed some retro curtain fabric I had into some colourful outdoor cushions. They add a splash of colour while cushioning our backsides! 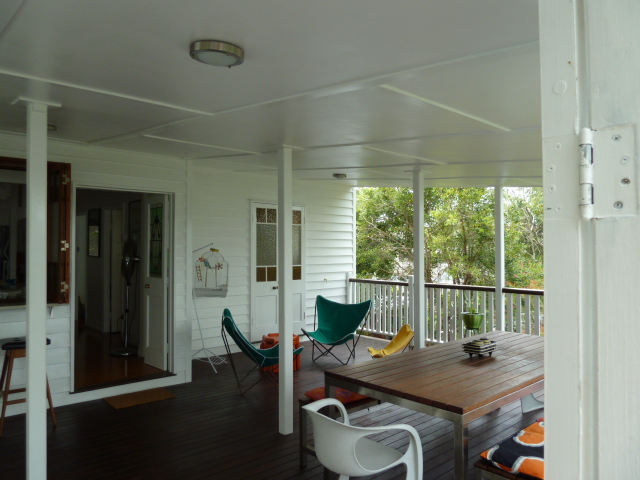 So there you have it.  A new improved deck which we can use all year round; and another project is crossed off the renovation list. Yay!!

p.s Special mention must go to Mr Rooney, our very helpful builder, who assisted Jason on the weekends to make our 'new' deck possible. Thanks!!
Email ThisBlogThis!Share to TwitterShare to FacebookShare to Pinterest
Labels: after, before, exterior, renovation