There are a lot of projects happening all at once at the Sow's Ear. It's hard to keep up at Action Central.

Jason took the day off on Friday to assist Mr Rooney, our stoic builder (you'll understand why...), to install an insulated ceiling on our deck.


Our deck has exposed rafters with a tin roof. It is almost unusable in the middle of the day because it is as hot as hell under there. I am not exaggerating either. We avoid using it during the heat of the day which is just crazy when it is such a great outdoor space.

So, Mr Rooney is helping us retro-fit an insulated ceiling. It sounds a lot easier than done, as the deck measures approximately 5.8m x 8m.

Jason and Mr Rooney have been working on it solidly for the past two days. They are extremely hardworking.

Yesterday was the measuring and preparatory stage. Since we are using hardiflex sheets for the ceiling it was important to get the right layout. It will be done in a brick pattern which distributes the load across the ceiling, as the sheets are quite heavy. 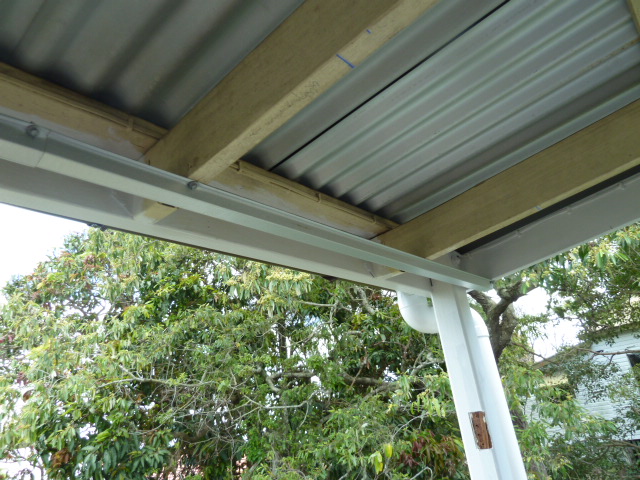 Metal ceiling battens were also affixed onto the rafters every 600mm. The foil insulation was inserted between the roof and the battens. Mr Rooney dusted himself with baby powder. He said it was to stop the fibreglass itch from the insulation. He was a sight to behold. I could've charged admission.

Once the insulation was in, there was an instant cooling effect or perhaps it was psychosomatic because it wasn't that hot yesterday.


Today Jason and Mr Rooney concentrated on putting in the ceiling. They enlisted the help of a sheet lifter which was hired for the weekend. It was soon renamed the "shirt lifter". Appropriate really, given Jason's predilection  for being shirtless.


The lifter was invaluable...especially when I had to drive Mr Rooney to the emergency hospital and Jason was left to his own devices for a while!!

Yes, Mr Rooney sustained an injury. The unbreakable Mr Rooney broke!
Don't worry people, he's okay now. Some nasty stuff got into one of his eyes. He thought he could wash it out but whatever it was did not want to be dislodged.
His eyes were bloodshot, his nose was dribbling; he was not in a good nor attractive place. Again, I could've charged admission.
Off to emergency we raced. Luckily there is a good private hospital nearby. A small shard of metal was removed from his eye. It must've flown into his eye when he was drilling into a metal batten.
When we got back to the Sow's Ear, Mr Rooney put on his safety googles (as did Jason) and returned to work with anaesthetised eyes. Such a trooper. A lesser man would've gone home for a cup of tea and a lie down, but not our Mr Rooney.
We are hoping to have it finished by tomorrow.