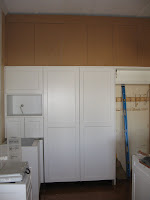 The kitchen is coming together nicely. All the cabinetry is in and it has exceeded my expectations, which is always quite low when “out-sourcing” work done around the house.
Our plan with the Sow’s Ear is to retain most of the original features and do a renovation which is mostly ‘keeping-in’ style with the house. We are re-painting the entire interior white, so it is a blank canvas for our 60s and 70s Danish style furniture and objects. Although our styling will lean towards mid-20th century modernist, the essence of the house will be what it is - Queenslander circa 1930s.
All the kitchen cabinetry is white with a simple router on the doors – similar to what exists on all the original interior French doors. We opted for a vinyl wrap finish which is harder wearing than 2 pack. With three growing children running amok, it is less likely to chip or damage.
The bench top will be light-coloured natural granite called white Kashmir. It is a light grey stone with flecks of purple, red and white. Sounds ghastly as I describe it, but the two slabs I saw at the Fine Stone warehouse were beauties.
The kitchen windows above the sink have been removed (we will recycle them on other parts of the house) and have been replaced with bi-fold windows which open onto the deck. The new windows are the exact profiles as the original windows. They are fantastic and have opened up the space without major structural change to the house. 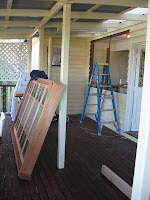 The bi-fold windows ready to be installed 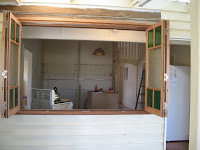 Ta daa! The new windows will open on to a servery
We are still waiting for the kitchen to be completed – just need the granite and the appliances to be hooked up. In the meantime, Jason will be painting the VJs. Fun, fun, fun! I don’t think so...
Email ThisBlogThis!Share to TwitterShare to FacebookShare to Pinterest
Labels: casement windows, kitchen, renovation