What does a nearly five year old ask for as his birthday cake? It's usually cupcakes, chocolate cake or a cake in a fancy shape like a pirate ship or fort, right? I was really pushing for this type of cake. A good friend even lent me a kid's birthday cake recipe book!!
Nup. Not Number 2 son.
For Number 2 son, it is profiteroles. Or "pwofitawoles" as he likes to call them. 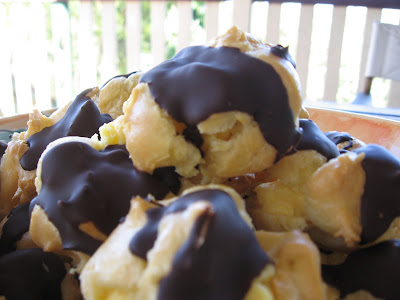 Life is a bowl of profiteroles
Last night I was up late making the choux pastry, to have it ready for the next morning to take to his kindy.
Number 2's choice of filling is a creme anglaise with the choux drizzled in 70% cocoa dark chocolate. All this was assembled first thing this morning because I would be on parent roster today.
I'm home now and man, I'm tired.
The profiteroles went down a treat with the other children and the teachers. I was told it was a welcome change to the norm of cup cakes (the kids tend to eat the icing and ditch the cake part - such a waste).
If cup cakes leave you ho-hum (not me, I'm a sucker for a home-made cupcake), here is the recipe* I use for choux pastry.

I've used it, so it is fool proof:


Place butter and water in a saucepan. Bring to rapid boil. Add sifted flour all at once (when still on the heat) and stir quickly so that it forms a smooth ball. Remove from heat and put it in a mixer. Add one egg at a time until the mixture becomes thick and glossy.

Use a teaspoon to drop mixture on to a greased baking tray (I use baking paper). Bake in a very hot oven (around 220 celsius) for 10 minutes, turn heat down to moderate (180 celsius) and bake for a further 15 minutes. Take out of the oven and cut a slit in each profiterole to let out the steam. Bake for a further 10 minutes or until crisp/light brown.

The secret to getting this right is having a very hot pre-heated oven. The heat is what puffs out the profiteroles. If it is not hot enough they do not rise and are just flat pieces of eggy dough. Proflateroles.
When they are ready, make sure you remove the inner dough from the centre and then you can fill with fresh whipped cream or Number 2's favourite - vanilla custard.

I generally drizzle the profiteroles with toffee (love the texture of the hard outer shell with the soft centre), but it seems chocolate is a safer option for the majority. It should be dark chocolate because milk chocolate is just too sickly sweet.

As this was my first batch of profiteroles since the new kitchen, I was very happy with the results, as was Number 2. The oven performed magnificently yet again!
Email ThisBlogThis!Share to TwitterShare to FacebookShare to Pinterest
Labels: Life