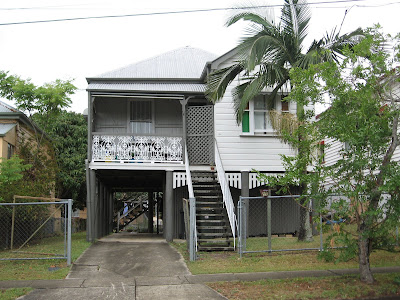 Original worker's cottage nestled in Stones Corner, Brisbane.
Queenslander homes have a distinctive style and are characteristic of Queensland’s architectural landscape. They were even voted as an icon for this year’s Queensland 150th birthday celebrations (Australia has a comparatively short history to most other nations).

Queenslanders often had some form of open or semi-enclosed verandah to capture any breezes on a hot summer’s day. Being built on stumps prevented the homes being inundated in flood prone areas (and there are many areas in the older Brisbane suburbs).

Internally, the walls were normally lined with vertical join (VJ) boards; the flooring was tongue and groove timber boards, while ceilings soared to 12 feet. The grander the home the more flourishes it had – decorative door breeze ways, pressed metal ceilings, ornate cornices and archways – while the humbler homes such as the worker’s cottage had smaller rooms with no extra trimmings. 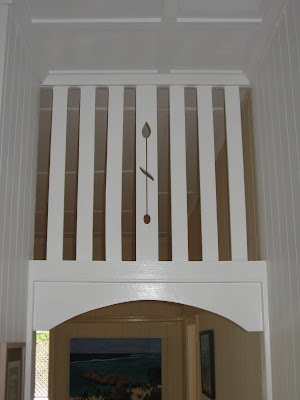 Our breeze way separating the lounge room from the kitchen. Simple traditional tulip design.
Before the advent of sewage in Brisbane (it was not completely sewered until the early 1970s), backyards were punctuated with little out houses, colloquially called “thunder boxes”. When internal toilets became the norm, they were generally tacked on to the very back of the house near the back stairs. Toilets were considered too dirty to have in the house and therefore embraced begrudgingly by their owners. Times have undoubtedly changed in this “two toilets or more” society we live in!
I grew up in a 1926 Queenslander in East Brisbane (my parents are still there) and lived in a worker’s cottage in Highgate Hill during my student years. For me, there is a certain charm to these old homes despite the lack of modern creature comforts (no ensuite, no walk in robes, no upstairs laundry). They are immensely likeable and liveable.
From my experience, they can get bitterly cold in winter because of the all the draughts blowing through the gaps between the floorboards, doors and windows. Alternatively in summer, they can get stifling hot if you don’t have an open veranda (many, like the Sow’s Ear had the old verandah enclosed to provide more internal living space).
Fortunately today, with good insulation, better building products plus the affordability of air-conditioning, this is a thing of the past.
Their major downfall is due to ongoing maintenance issues. Timber attracts termites, it weathers, it needs to be re-painted regularly and if they are neglected they will deteriorate beyond repair.
Queenslanders are also notoriously expensive to repair and renovate.
The Queensland Museum has an interesting website here if you would like to know more. The Cairns Regional Council also produced information about caring and maintaining a Queenslander, which I found insightful. Here is another link about a Queenslander home in the Brisbane suburb of Annerley, which documents the changes made to the home since it was built early last century. And for some further reading materials, Ian Evans is a prolific writer of books regarding the care and restoration of old Australian homes and this website lists some useful publications .
I haven’t done the research on the Sow’s Ear yet. It's on the cards though.
Email ThisBlogThis!Share to TwitterShare to FacebookShare to Pinterest
Labels: Queenslanders