I am sharing with you the best Letter to the Editor I have ever read in The Courier Mail. It was featured today and it is about the sorry state of Brisbane's public transport system and the lack of courtesy that some students exhibit. 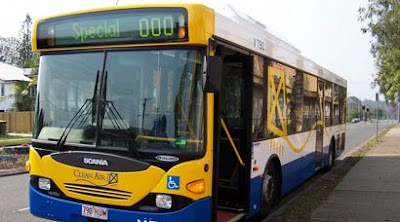 It is also the reason why Jason now drives to work after 20 years struggling with the Bombay Bus Service (his words, not mine) and why I avoid buses like the plague.
This letter describes perfectly how we feel whenever we use the bus. If you like, imagine dapper, suit-wearing Jason (as opposed to the shirtless one that you all know and love) on his way to work in the City as you read it...
Sweet images of revenge
AS the crammed bus jerks nauseatingly along the Western Freeway towards Indooroopilly, murderously childish intentions flicker in my mind like a movie of sweet commuter revenge.
With my work gear clutched between my legs, fingers grasping for the nearest pole to break a fall, my back aching and my work uniform clinging to me, I plan and plot my revenge.
See that schoolboy slouching in the seat to my front. I walk past and flick that stupid wicker hat off his red hair. I do the same to all the other schoolboys who take up the seats along the aisle. Flick, flick, flick.
See that university student with the green concession go card that gives her discounted fares. I will punt that $2500 notebook computer out of her grasp or accidentally dislodge the USB connecting her sleek iPod, probably with the aid of my blue go card, the expensive one for workers on medium wages who don't own any of the above technology because their money goes on bus fares.
See those schoolgirls, giggling and whispering in a group of chairs, watching as I struggle to surf around a corner. Out goes my foot as they depart the bus. Trip, trip, trip.
The grey-haired grandmother standing behind me and the pregnant woman cheer as I block the way of the young school children rising from their seats.
Soon enough, we reach Indooroopilly and I realise I am 34 years old and beyond such adolescent antics. Still, as they stream past me and my sore feet, I grin to myself.
Briohny Dixon, Fig Tree Pocket  letter from here
Briohny for Lord Mayor!!!
Email ThisBlogThis!Share to TwitterShare to FacebookShare to Pinterest
Labels: Life