How cool is it when something you really want turns up on your doorstep? How sad is it when all you want are succulent plants...

Yes, the agave fairy came to the Sow’s Ear when we were out this morning. I received about 10 foxtail agaves from a thoughtful friend who reads my blog (it has paid dividends). She's clearing her yard and the agaves were destined for her wheelie bin. 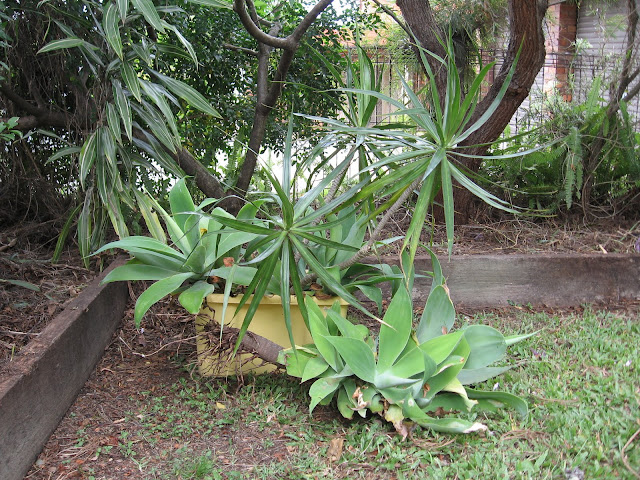 Foxtail agaves are the short succulent plants. The tall spiky plant is the dracaena.
These plants are also known as agave attenuata which are a spineless species which produce a bluey green rosette. I think they rock because they are so bold and have an architectural appeal.

They are disgustingly easy to care for in Brisbane's sub-tropical climate and can survive my potential neglect. I also scored a cutting of a dracaena marginata plant from another friend.

We did a bit of clearing of the garden beds last week and it looks like we will be gardening again this weekend.
Email ThisBlogThis!Share to TwitterShare to FacebookShare to Pinterest
Labels: garden, plants