I did a spot of rearranging at one end of our sunroom a few weeks ago. Nothing too dramatic but it has changed how we use the space.

It still has a long way to go because the entire sunroom needs a complete overhaul (paint, new windows, fibro removal). Lucky we have an abundance of patience. We think the sunroom was a DIY enclosed verandah because of the thick posts between the windows and the fibro sheeting. 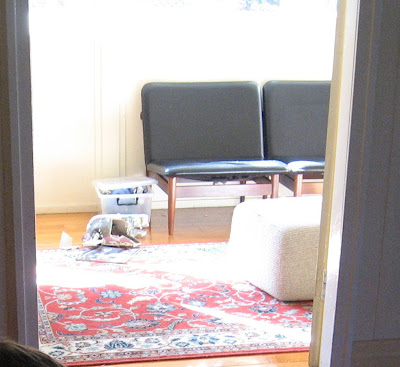 Playroom - this is how it was.
This end is used as the play/reading room. Moving to the Sow's Ear meant we lost a dedicated playroom for the children. I sold our modular Numero IV lounge chairs because we no longer had the room (I kept the ottoman). But I soon remedied that when I bought some DQF viking chairs with the sale proceeds.
Danish Quality Furniture is the Brisbane mid century version of Melbourne's Danish Deluxe or Adelaide's T.H Brown & Sons. It was known for its exceptional quality. 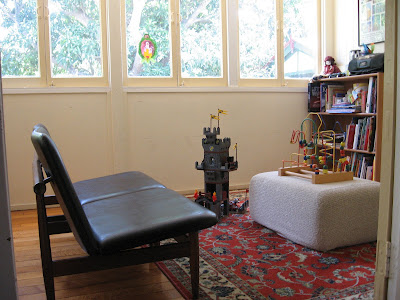 Now - play room/reading room.
We brought up the modular foam ottoman from the gimp room. The kids use it to bounce up and down on, as a foot rest and as a play table, but usually they bounce on it. The bookshelf is old Freedom furniture from 1998 (stunned it has lasted this long) and houses the children's books and general junk. There are also a couple of toy boxes which store their blocks in one corner of the room They aren't so attractive and didn't even rate a photograph.
I floated the chairs in the middle rather than against the wall - it was criminal to hide the beautiful richness of the blackbean timber. The rug was turned around too. 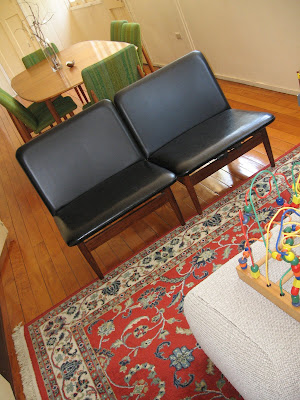 The sunroom is also used as our dining room. I wanted to have an area where the kids could chill after dinner. It makes a good sitting room in the morning and evenings. It does get hot in the afternoon at the moment - the room is truly in its element during our mild winters.
The sunroom will do for now. It is just hard to keep tidy when toys are thrown into the mix.
Email ThisBlogThis!Share to TwitterShare to FacebookShare to Pinterest
Labels: dining room, furniture, mid century, sunroom