Having established the Stables family (click to read more) had owned the Sow's Ear from 1927 to 1988, I thought it would be interesting to Google their names - to see if there was anything ever witten about them and shed some light about the Sow's Ear.

I actually didn't think it would be a successful experiment... I began with Zoila because in 1920's Brisbane her name would have been highly unusual. It is a Spanish name and it means life.

The entry below was found in a Catalog of Copyright Entries Part 1, 1936, Library of Congress, Copyright Office, United States Dept. of the Treasury P.1418. 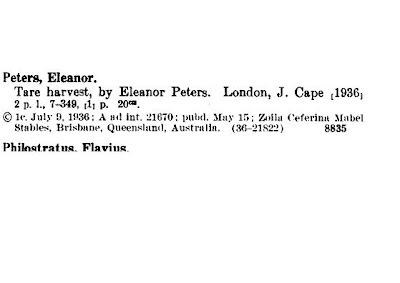 It appears she owned the copyright to a  book called Tare Harvest by Eleanor Peters.

I also discovered she attended The University of Queensland in the mid 20s and the she was awarded a Bachelor of Arts. She studied English, French and Logic. This was in a day when women were a minority at the University.

Perhaps the most revelaing thing about the Google search is that she is quoted and used as a case study in a book regarding psychic communication. She experienced astral projection or out-of-body-experience!

"My first projection was in my early teens..."( Crookall, R.,The Study and Practice of Astral Projection, Citadel Press, 1977 p.74.)

Screen print of cover from Amazon.com

Zoila gets more fascinating by the minute.

Now, this is by no means an exhaustive history of Zoila Stables - just a few stolen moments on a computer search engine from the comfort of my own home. I haven't really tried to find out about Florence or Stanley yet, because Zoila is so damn interesting.

Although I still haven't found out much about the house, it is a good beginning.

Jason reckons I should invest in a ouija board (à la Prince Charles) and consult with Zoila personally about the history of the house. What do you reckon?
Email ThisBlogThis!Share to TwitterShare to FacebookShare to Pinterest
Labels: History