Side stairs and stump tour

For something a little different, I thought I'd take you on an outdoor tour of the Sow's Ear.

This old mango tree stump and ghastly set of stairs have been earmarked for total annihilation. 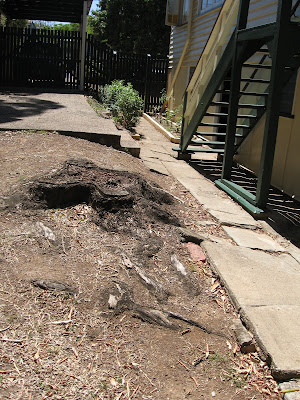 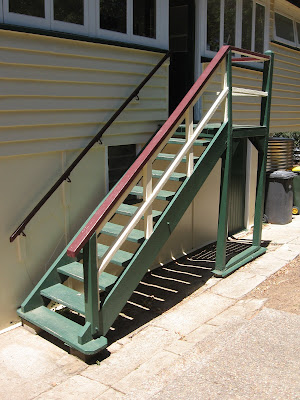 Stairway from hell.
Soon after we moved to the Sow's Ear in May, we obtained a quote to have the entire sunroom and side stairs repaired and rebuilt. It was the second thing on our list after the kitchen was completed, but then Jason's car was stolen at Bunnings. When he bought his new car this project went on hiatus. We are now focused on doing small DIY projects for the next little while.

Jason's comtemplating fixing the sunroom himself (re-fitting different windows, removing that lovely substance called asbestos and recladding the internal walls with VJs) but  he will definitely outsource the stairs to a builder. It's just a matter of time and money.

As you can see, the old tree’s root system has wrecked the cement path which is now a mosaic of its former self. The stump will eventually be removed or at least ground down when we re-do the path near the stairs. For now, the kids use it as their theatrical stage.

We have a drainage problem under the house too. In a downpour, water gets in under the house and was probably the main reason the house was never built in underneath. There are about three dirty great big drains under there so it should never get too dire, but it will always be damp during a downpour.

You gotta love these old houses! Hope you enjoyed this outdoor tour.
Email ThisBlogThis!Share to TwitterShare to FacebookShare to Pinterest
Labels: exterior, garden